You can’t eat the cake and have it:
Why an acoustically transparent fabric can’t be 100 percent opaque

“Is your Acoustic Cloth really opaque?” That’s a question our customers ask quite frequently. After all,  speaker fabric from Akustikstoff.com is primarily used to hide loudspeakers, AV equipment or whatever else as elegantly as possible without impairing acoustic transparency. 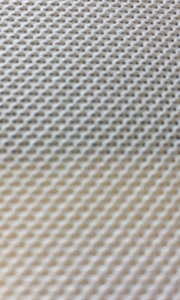 The theoretical ideal is obvious, of course: absolute acoustic transparency plus absolute opacity (i.e., the opposite of transparency) at the same time. Unfortunately, the laws of physics counteract this ideal, since both sound and light are waves – temporal and local periodical changes of a physical quantity in the dry language of physics.

It’s all about waves

As sound propagates through the mechanical deformation of a medium, in our case by changes in air pressure, everything that is in the way acts like a kind of barrier: It is moved itself and starts vibrating, this way absorbing energy from the impinging waves, and it reduces the amplitude, i.e., the magnitude of the oscillation. That’s why a completely closed, airtight surface always attenuates sound waves. Depending on the material, the sound is “swallowed” by resonance and usually reflected or diffused to a certain degree at the same time.

Put the other way round, high acoustic transparency is simply impossible without openings, through which air – and thus the sound – can penetrate. Even the smallest apertures, however, can also be penetrated by visible light, which has a much shorter-wavelength. This effect can be experienced in a striking manner in a completely darkened room as soon as the door does not close completely on all four sides of the door frame.

Insufficient acoustic transparency is most noticeable in the higher frequencies within the normal range of human perception: the short-wave, low-energy high frequencies and high mids are attenuated first, while energetic, relatively long-wave bass frequencies are noticeably less hindered. In practice, this means that unsuitable or inferior cloth for acoustically active elements usually eliminates exactly those acoustic frequencies that are of utmost importance for a sophisticated, well differentiated sonic image.

Exploring the limits of physics

The secret of high-quality Acoustic Cloth is that it lets sound waves pass through virtually unimpeded but blocks the light waves as much as possible. At Akustikstoff.com, we’ve performed a lot of research and development work to get this physical balancing act done in the best possible way. Nevertheless, it is in the nature of things that both objectives can’t be achieved to the full at the same time. In addition, there’s a third, no less important aspect to be considered in the development of loudspeaker cloth, and we’ve put quite some effort in it: robustness. That’s why all covering fabrics from Akustikstoff.com are remarkably durable and are very easy to process while they feature the highest possible opacity and excellent sound transparency. We’ll go a bit more into details on this in a separate article in the near future. 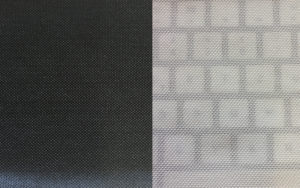 In pure incident light, dark colours tend to be more opaque than bright colours. Here in comparison: black and white.

Typically, problems with the opacity of acoustically transparent covering fabrics occur when there’s a strong contrast between a speaker cloth in a light colour and rather dark objects behind it, when there’s light from behind, and when a source of strong incident light is pointed directly at the surface of the Acoustic Cloth.

The most important measure to prevent translucency is to keep the contrast between the covering fabric and the objects behind it as low as possible. It is worthwhile, for instance, to varnish the cover frames and fronts of speaker cabinets and sound absorbers, in matt white if they are to be covered with white acoustics.

In addition, a larger distance between the background and the Acoustic Cloth helps prevent translucency. If, however, the speakers installed in a white housing have pitch black diaphragms, these will nevertheless remain visible under most lighting conditions. In some cases, this may even be desired since the effect can also be very elegant depending on taste and design. A similar transparency effect may occur with absorbers: If grey absorber material (think Basotect®) is covered with a piece of white Acoustic Cloth, the surface will often not appear in pure white, but rather in light grey.

The two pieces of speaker fabric illustrate the intensive contrast of black and white. However, the contrast between black and yellow is even stronger. 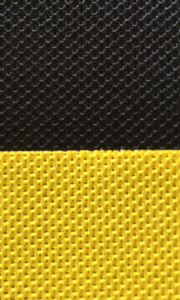 The strongest contrast: black and yellow – in this case illustrated with two pieces of Acoustic Cloth from Akustikstoff.com

By the way, the contrast between black and yellow is even stronger – hence the colour combination of yellow and black for safety markings.

Avoid translucency from behind

A certain degree of optical transparency remains unavoidable if acoustically transparent fabric is exposed to backlight: Similar as with a curtain, the contours – or even more – of objects placed behind a piece of Acoustic Cloth will become recognizable if light is permeating the fabric directly from behind. This problem occurs mainly with AV furniture such as soundboards, soundbars, and lowboards. To avoid this “curtain effect”, place your AV furniture cleverly to prevent daylight from shining through and don’t put any artificial light sources behind the furniture.

Strong, bundled light that is directed right at the front on the speaker fabric can also lead to transparency effects: The light penetrates the Acoustic Cloth, is reflected by the objects behind the cloth in the opposite direction, permeates the fabric again and this way leads to a certain degree of transparency. Such effects can be prevented by not pointing any light source directly at the fabric, rather using diffuse light, and ensuring a lateral light incident. 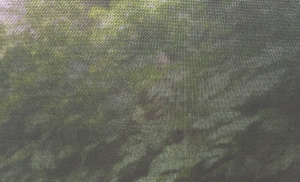 The “curtain effect”: The higher the tension under which the elastic speaker fabric was mounted, the more transparent the speaker cloth becomes. The photo shows a piece of heavily stretched Acoustic Cloth with bright sunlight from behind.

The tension that is applied when processing our acoustic fabric is has a considerable influence on its optical transparency: The more intense the elastic fabric is stretched, the wider the meshes become. While heavily stretching a meshed fabric may improve its acoustical transparency (you won’t really need to do this with Akustikstoff.com Acoustic Cloth, as the utmost sound transparency was our primary design objective), it also changes the opacity of the material. This can lead to the so-called “curtain effect”: especially in the case of backlight, the fabric becomes progressively less opaque with growing tension. In such a case, it is necessary to experiment somewhat before final assembly.

Depending on the application, it may be possible to use two layers of Acoustic Cloth to improve the opacity of the speaker fabric. The acoustic losses, an additional reduction by approx. 1-2 dB at approx. 8-9 kHz, are well within the acceptable range. Even if you use two layers of our Acoustic Cloth, acoustic transparency remains distinctly higher than that of other single-layer materials*. However, it is necessary to work very carefully in order to avoid the dreaded moiré patterns that the fine structures of the fabric may cause when they’re spatially overlapped. To a certain extent, this can be avoided by using the more structured surface of the fabric as the outer side at the front and the second layer with the slightly smoother side outwards. Then twist the two layers of fabric against each other until the moiré effect disappears. Again, some experimenting prior to the final fixation of the speaker fabric will ensure an optimal result.